Chiang Mai and its many temples

Our mini bus trip to Chiang Mai was a comfortable 5 hour drive – we are getting smarter and got in first to get the front row with extra leg room.

Chiang Mai is the largest city in northern Thailand and the remnants of the Old City wall as well as the 4 gates still stand. There is also a moat surrounding the Old City. 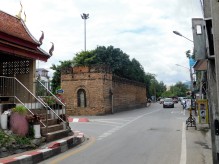 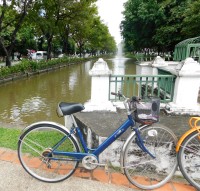 We hailed an Uber and set off for our accommodation only to realise that the address was simply the road name – turns out rather a long name – and no building name (it was an apartment that we assumed was in a block of holiday apartments – turns out it was just some bloke’s apartment that he rents out) after hanging around trying to get some sense out of anyone we eventually got on the web and booked a new hotel within the Old City. This turned out rather fortuitous as the previous accommodation would have necessitated cabs everyday whereas the new hotel was within walking distance of all the attractions.

We discovered early on that a few things have changed in Thailand (although I had been in Phuket in May, they seem to have ignored these changes) – the main change is the restricted liquor laws – and these apply in the 711’s as well – liquor may only be sold between 11am and 2pm and then again from 5pm to 11:30pm, this has resulted in a few smaller pubs/restaurants not opening for the whole day and only opening in the evenings. We also noticed a lack of small eateries and street food which have always been synonymous with Thailand to us. Another shocker was the increase in prices in the last few years – gone are the days of having a relatively cheap holiday in Thailand. I have just discovered that posting selfies or any photos with alcohol in online is also punishable – so maybe I will omit those ones.

There are 622 Buddhist temples in Chiang Mai and I think we visited 50% of them either on foot, by bicycle or by taxi. They are all operational temples and as such you need to be aware of the monks and their traditions. A few of the temples have “monk chat” which gives you the opportunity to learn about Buddhism whilst giving the monks a chance to practice their English. 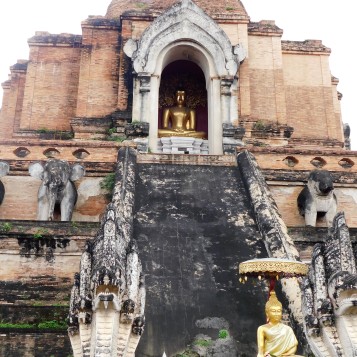 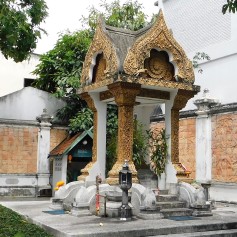 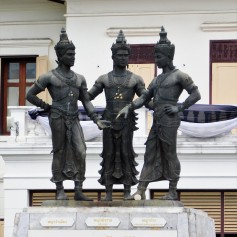 There are the usual Thai attractions like the zoo and elephant sanctuary but, as usual, we avoided these and opted instead to rent bicycles and meander down all the side streets. We shopped in the local food market which resulted in me buying a whole sheet (10 bags) of an undetermined spice which we think looks like dried chilli and perhaps curry powder but can’t really be sure of as the writing is in Thai – I thought I could buy on pack off the card – but it turned out not to be so and I was evidently committed to the sale. I may be taking this home to South Africa to Witt out local Thai restaurateur.

A well timed stop on our “Tour de Chiang Mai”

The obligatory Irish Pub with a rather odd wedding photo shoot

Admittedly the market thing is overdone in a big way but I was really impressed with the Sunday walking market in Chiang Mai as there was none of the usual cheap tat that is normally on offer at these markets, but rather a lot more crafted garments and wooden as well as silver goods.

We booked our hotel taxi to take us to Wat Phra That Dot Suthep which stands on the mountain overlooking Chiang Mai. Once there we climbed the 306 steps to the top and this truly felt like the top of the world. The staircase is flanked by mosaic Naga (serpents) and it is thought that the walk earns the Buddhist pilgrims merit – there is a funicular for the less energetic. Once at the top you enter the temple grounds and once again this is an operational temple and the need for respect and deference is vital. The temple itself is said to have been founded in 1383 and over time has been added to and made more elaborate. The chedi (the central monument) is copper plated and her most sacred part of the temple. 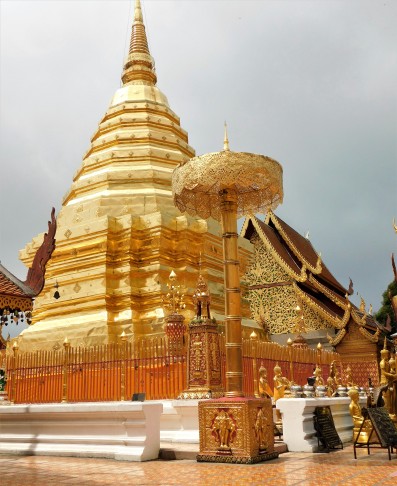 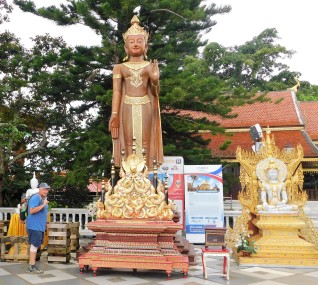 We left Chiang Mai by overnight train to Bangkok and after our previous train trip in Vietnam were hesitant to say the least – the pictures looked great but we had been there before.

We were pleasantly surprised when we boarded our train – the carriage was exactly what the advertising said it would be. 2 person berth with comfortable seats that converted into the beds – which the steward came and made up at 7:30pm. I took the top bunk and we each had out own telly with controls at our heads and headphones, we had our own wash hand basin and towels. There were 3 loos and a shower for the 1st class carriage and there were indicators on the telly’s to let you know if they were occupied or not – a great feature in my mind. In all this was a great trip and we would highly recommend it. I must admit we walked down the restaurant car and I felt like I was on the Starship Enterprise as I waved my hand over sensors and doors swished open. We walked through the 2nd class sleepers and these look really comfy as well the only difference being that the beds are not in separate cabins. 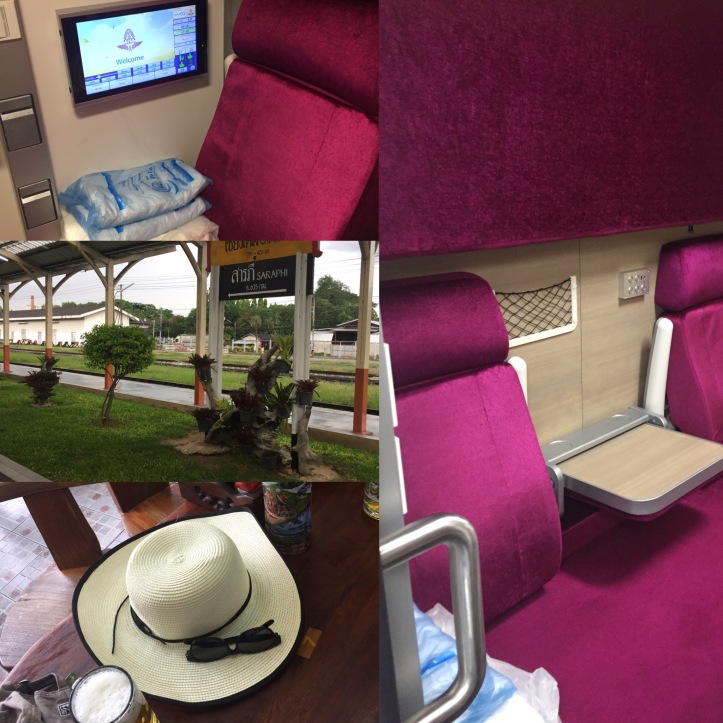 Fortunately, we discovered that the train stopped at Don Muang airport and we were able to disembark there which saved us lugging bags around Bangkok to get back from the main station.

After a long day in the airport (I know the airport pretty well now after the 12 hours I spent there on my last Thailand trip in May) we headed home to Hanoi. 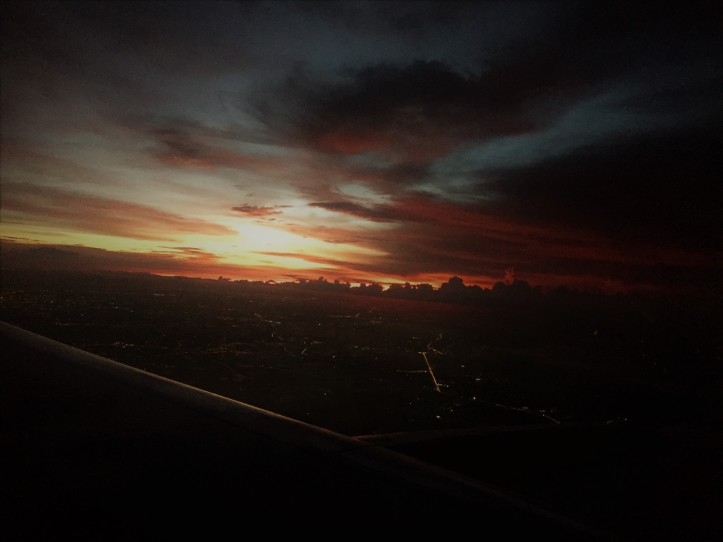 Thailand showing off with a magnificent sunset as we took off

Note to self – next holiday will not involve having to climb mountains!

On that note, we are off the Kuala Lumpur to the final Malaysian Grand Prix this weekend so I will report back on that soon.