The start of our month in Indonesia

The year got off to a relaxing (if somewhat chilly) start, with planning for our trip to Lombok.

We treated ourselves to front row seats for our flights (2 by 3-hour flights) to get the extra legroom and it was well worth it. We headed south to Kuala Lampur for a 3-hour layover – we decided to exchange USD there as we had the time. What a mistake that was – we went to the Travelex  – an Authorised Foreign Exchange counter and were offered Indonesian Rupiah at a rate of IDR 10 050 to US$1 – having checked online this seemed a little low – especially as they claim that they do not charge commission – in fact they don’t need to charge commission as they are keeping in the region of IDR 3 000 per US$1 which adds up very quickly – and the rate of IDR 13 350 is from the money changers on the main road in Senggigi – and money changers are not necessarily the best rate available either.

We had pre-booked a taxi to collect us from Lombok International airport (via the taxi app) and while we were waiting and checking on the app we were accosted by private taxi operators who claimed that that particular taxi firm as well as Uber and Grab were not allowed to collect at the airport – only drop off – not knowing any better we assumed that they were correct and fell for the scam! Fortunately, the driver we used was a really good guy and we managed to pay very close to what the taxi firm would have charged (we have in fact booked him for further rides we will be needing).

We have rented a house for the month we will be here and are staying in a little suburb of Senggigi – a short walk to the beach and shops and a short bike ride to the main strip of restaurants.

We have hired a scooter to make life a little easier and had our first accident within hours of getting it! The coastal road in our area is quite hilly as it winds along and some of the downhills are a bit hairy – we are used to the chaos of Hanoi traffic but not really used to cars and trucks speeding along the road behind us. We were going down one of these hills and moved to the hard shoulder to avoid getting mowed down –  we didn’t notice that the hard shoulder was covered in moss and the bike slid from under us as a result we got a slightly grazed – well Ivan did (maybe a little more than slightly)  – I got off really lightly with a few bruises but nothing major – more importantly the bike escaped unharmed – I think that was thanks to the moss! 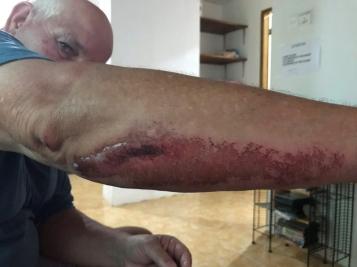 Despite that we have got around a fair amount in the first 3 days here – travelling North to the ferry harbour to see about getting over to the Gili Islands as well as venturing into the centre of Mataram to get the lowdown on transport to East Nusa. And of course, we have enjoyed sundowners on the beach the sunsets here are truly magnificent! 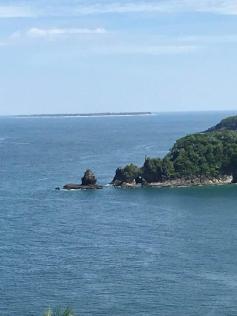 It was really great to get our feet in the sea again.

We have booked to go to Maluk Beach for a few days next week and will be spending Ivan’s birthday at Kuta Beach on the south of the island. Added to that Candi and Sholto are arriving from Hanoi this weekend for their Tet Holiday and we have friends staying on Gili Meno to visit as well – so it is going to be a very busy month.

I did manage to buy myself some bamboo straws – say no to plastic straws!!!

Watch this space for more adventures in Indonesia!