As it was Ivan’s birthday we decided to treat ourselves and opted for a hotel for this trip as opposed to and Airbnb which we had been using for the rest of our Indonesia stay. We called on our trusty driver – Putu – to take us the 65km from Senggigi – we had originally considered going there by motorbike but after the harrowing drive the week before decided that a car was much safer (in fact, is would have been a doddle on the bike – but as they say Hindsight is 20/20 vision). We were quite excited to have our first hot running water since we left Hanoi 3 weeks ago. 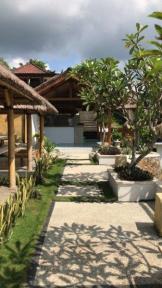 Our hotel was about 800m for the main town area along a rather bumpy dirt road – but the view over the main Kuta bay area was spectacular especially from our outdoor bathroom and the infinity pool!

We rented a motorbike and explored the town – pretty much just restaurants/pubs and surf shops. We wandered past the beachfront development down a brand new magnificent road and the veered off this to find the beginning of a five-star hotel and an existing five-star hotel at a dead end that led to a wooden walking bridge to Seger beach – a fantastic (and popular) surfing beach. 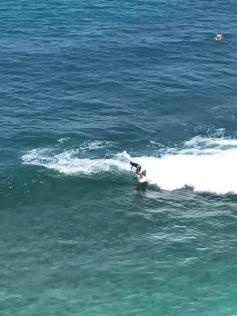 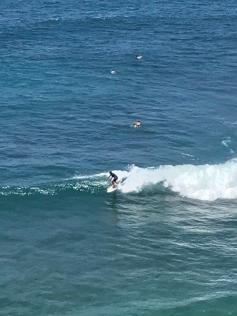 We wandered across this bridge and say this beautiful set of statues – I have since investigated and discovered this is a representation of the Princess Mandalika rushing into the sea to drown herself after her father had held an archery contest to find her a suitable husband. Unfortunately, all the suitors were of an equally standard and they could not find a winner and rather than have them fight to the death for the honour of marrying her – she opted to walk into the ocean and disappeared. Depending on the version one reads – they were either ordered to fight to the death or started fighting amongst each other – either way she was having none of it. Legend has it that every year – around February or March – worms make their way out of the ocean and these are believed to be her hair, and they hold a festival around this time.

The following day we found a fantastic beach Tanjung Aan beach with white powder sand and crystal clear, azure water which was the perfect depth for swimming (with no coral to crawl over first). 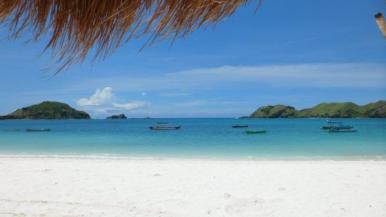 There were great umbrellas made of fried palm fronds with recliners as well as cabanas which were free to use – which was a bonus – the only downside was the sheer number of stray dogs. They even got cheeky enough to jump on the cabanas when people were eating – but I will almost guarantee that some people have in the past fed them and this has created this bad habit (the odd dog fight was also rather unpleasant). There is a charity in Kuta that raises funds and brings in a veterinarian team to sterilise these strays.

One of the perks of our great hotel was that we overlooked the beach and watched the fisherman coming and going and were also able to witness the extreme tides experiences there. 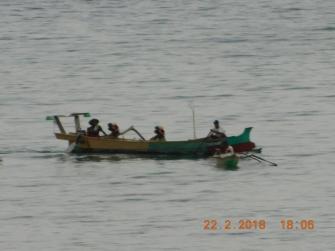 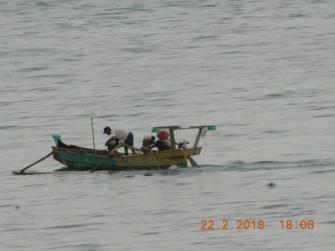 At about 5pm every night the “grommets” (young learner surfers) came out en masse to practice their new passion on the half metre waves – it was very sweet to watch as they are so light that they manage to ride a swell for ages and get carried quite a distance.

It was heading out this way, that we saw even more development taking place with fantastic roads being built, which we assumed meant that more hotels and resorts would be built as well. I discovered today, in fact, that apparently the governor of Lombok (West Nusa Tengarra Province which incorporates Lombok, the Gili Islands and Sumbawa) is hoping to secure a Moto GP street race in Kuta – I cannot wait to be able to verify this further – although I did manage to find an article on a Google search that seemed to indicate that this is in fact the case.

PS: The hot shower did not in fact materialise as the hot water was “not working” – watch this space.

What amazing sunrises we got.